SANCTIONS IN INTERNATIONAL LAW: THE US EXAMPLE 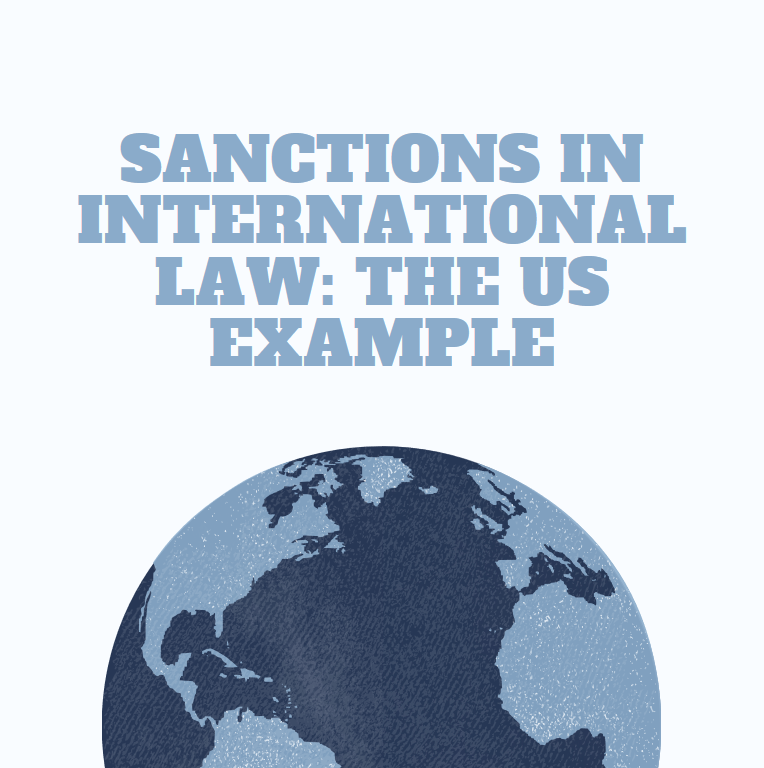 The Origin of Sanctions

The relations between the national states, formed as of the end of the 19th century and the beginning of the 20th century, have drawn a very distant view from the friendship. Relations between states have undergone major changes, especially after the two world wars left behind. While the state of war was a continuous status and peace was the exception, peace has been prevailed in international law with the Charter of the United Nations, and the use of force has been prohibited excluding certain exceptions. Controversy that has existed between states for a long time and manifested in the form of the use of force has been replaced by alternative methods. One of these methods are sanctions.
Sanctions are commercial and economic penalties imposed by one or more countries on a self-governing state, group, or individual. Sanctions are not generally applied due to economic conditions, but rather for various political, military and social issues. Sanctions can be used to achieve domestic and foreign policy goals and states are trying to fill the gap arising from the threat of use of force through sanctions, that could cause much greater damage to civilians. The United States is the leading state that can achieve significant results in international law through unilateral sanctions decisions.

United States of America and Sanctions

Besides having the military power to have a voice in world politics, America is a legal person who actively uses the phenomenon of “economy shaping world politics,” which used to exist but is not as visible today. As a matter of fact, it tries to resolve its relations with other states – whether commercial or military relations – through sanctions. Most of these sanctions emerge as economic sanctions and are mostly considered as threats.
Sanctions are not only limited to their own subjects and purposes, they are also used in the resolution of some other disputes. For example, the United States and Turkey, where parties have made a joint statement on the establishment of safe zone in Syria, parties also agreed to lift some sanctions applied to Turkey by the U.S. Likewise, the sanctions were brought to the agenda during the Brunson crisis.
Similar to these two stiuations above, the U.S. Senate adopted a draft resolution recognizing the so-called Armenian genocide and has also called for sanctions against Turkey who bought the S-400 air defence systems from Russia. Moreover, sanctions to ensure the removal of Turkey from the F-35 projects are on the agenda. In short, the U.S. uses sanctions in its international politics as a very effective trump card.

Sanctions have a serious significance in American domestic politics. As a matter of fact, the law that came into force in 2017 in the U.S., CAATSA (Countering America’s Adversaries Through Sanctions Act) shows this. It would not be wrong to say that the impact of America’s domestic politics on world politics will increase due to this law. Hence, according to the reactions from the public to certain occasions, some sanctions may be applied against certain states.
CAATSA, which forsees 12 different sanctions, envisages the implementation of at least 5 sanctions chosen by the President. With its entry into force, it was put into practice against Iran, Russia and North Korea. It should be emphasized that CAATSA has more functions than a simple sanction mechanism as it determines the states that America has described as its adversary and has shaped the international economy seriously.
Considering the sanctions that can be taken based on CAATSA, sanctions such as the prohibition of foreign exchange transactions, not granting loans from financial institutions, no tenders or contracts, banning capital exchanges, and not granting export licenses can be said firstly. Likewise, some sanction mechanisms can be applied to individuals, such as the prohibition of entry of persons to be sanctioned into the country.
Sanctions have a different purpose than their subject. The states want to change some behaviour in the target states or they send a message to the international community. The sanctions imposed by America especially within the framework of CAATSA and in line with the decisions taken unilaterally should be evaluated within this framework. As a matter of fact, considering the threats of sanctions and the content of the sanctions applied, America sees itself as the regulator of international law.
America tries to use its economic power all over the world, in order to change the direction of activities that it does not like. Even if the sanction itself is not successful and the target state does not change its behaviour, serious economic losses occur on the target state. However, it should be noted that these sanctions that America has applied unilaterally man create some counter grouping.

Although the sanctions do not result in as severe consequences on the target state, they also create adversities for implementing states in the long-term. Relationships with the state, which impose sanctions, cannot be at a sustainable level for other states as a result of unpredictability in a legal sense. Other international law entities are trying to break the hegemony of the U.S. Dollar and the U.S. with new economic moves as they realize that their national economies depend on the American economy and the decisions made by America.
To put it shortly, the sanctions that the U.S. has applied unilaterally have become an instrument that it uses to produce results in their national law rather than making certain regulations in international law. It is possible to say that this situation, which has serious consequences on the target states, will inevitably lead to new unions and reform movements in international law.