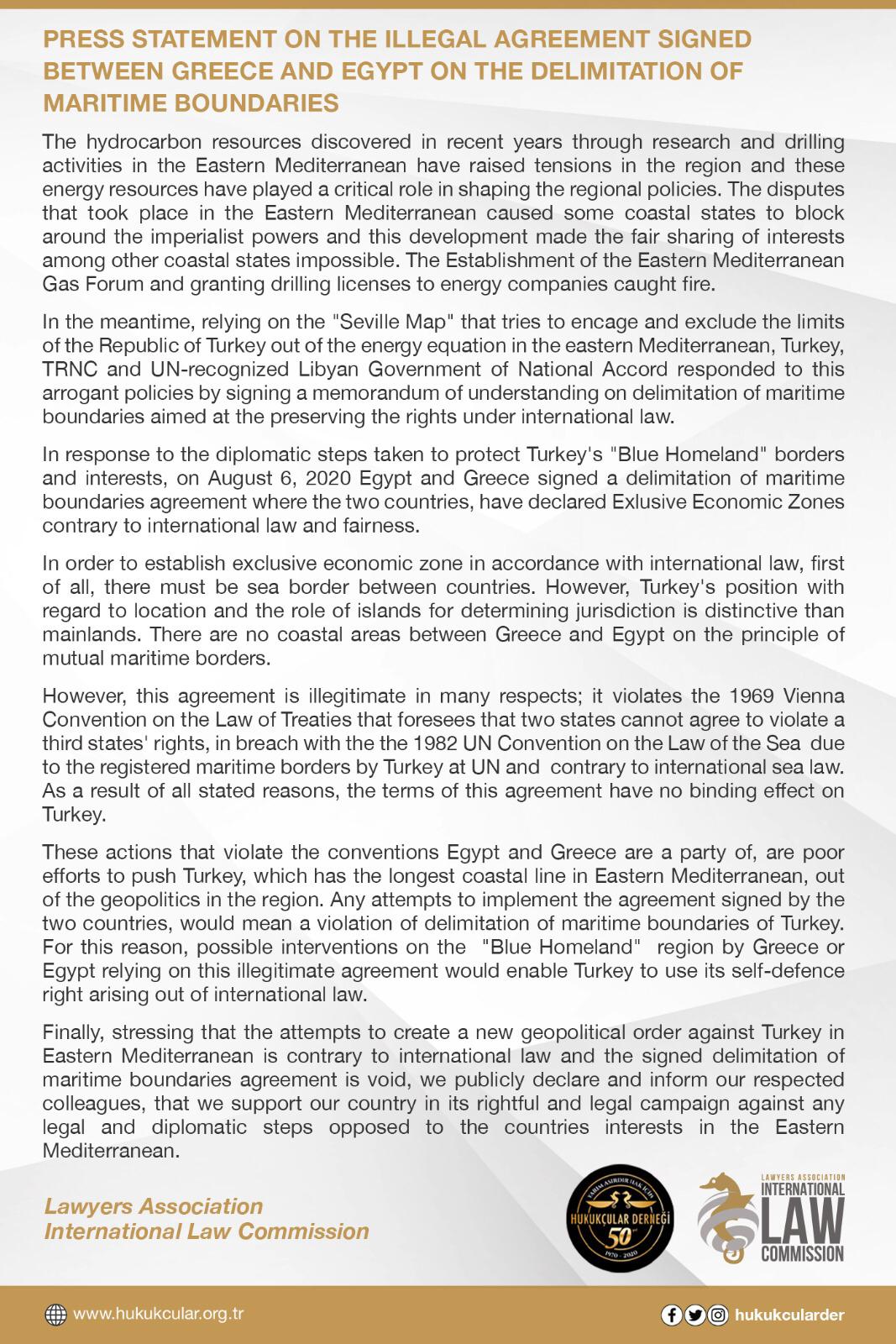 In the meantime, relying on the “Seville Map” that tries to encage and exclude the limits of the Republic of Turkey out of the energy equation in the eastern Mediterranean, Turkey, TRNC and UN-recognized Libyan Government of National Accord responded to this arrogant policies by signing a memorandum of understanding on delimitation of maritime boundaries aimed at the preserving the rights under international law.

In response to the diplomatic steps taken to protect Turkey’s “Blue Homeland” borders and interests, on August 6, 2020 Egypt and Greece signed a delimitation of maritime boundaries agreement where the two countries, have declared Exlusive Economic Zones contrary to international law and fairness.

In order to establish exclusive economic zone in accordance with international law, first of all, there must be sea border between countries. However, Turkey’s position with regard to location and the role of islands for determining jurisdiction is distinctive than mainlands. There are no coastal areas between Greece and Egypt on the principle of mutual maritime borders.

However, this agreement is illegitimate in many respects; it violates the 1969 Vienna Convention on the Law of Treaties that foresees that two states cannot agree to violate a third states’ rights, in breach with the the 1982 UN Convention on the Law of the Sea due to the registered maritime borders by Turkey at UN and contrary to international sea law. As a result of all stated reasons, the terms of this agreement have no binding effect on Turkey.

These actions that violate the conventions Egypt and Greece are a party of, are poor efforts to push Turkey, which has the longest coastal line in Eastern Mediterranean, out of the geopolitics in the region. Any attempts to implement the agreement signed by the two countries, would mean a violation of delimitation of maritime boundaries of Turkey. For this reason, possible interventions on the “Blue Homeland” region by Greece or Egypt relying on this illegitimate agreement would enable Turkey to use its self-defence right arising out of international law.

Finally, stressing that the attempts to create a new geopolitical order against Turkey in Eastern Mediterranean is contrary to international law and the signed delimitation of maritime boundaries agreement is void, we publicly declare and inform our respected colleagues, that we support our country in its rightful and legal campaign against any legal and diplomatic steps opposed to the countries interests in the Eastern Mediterranean.