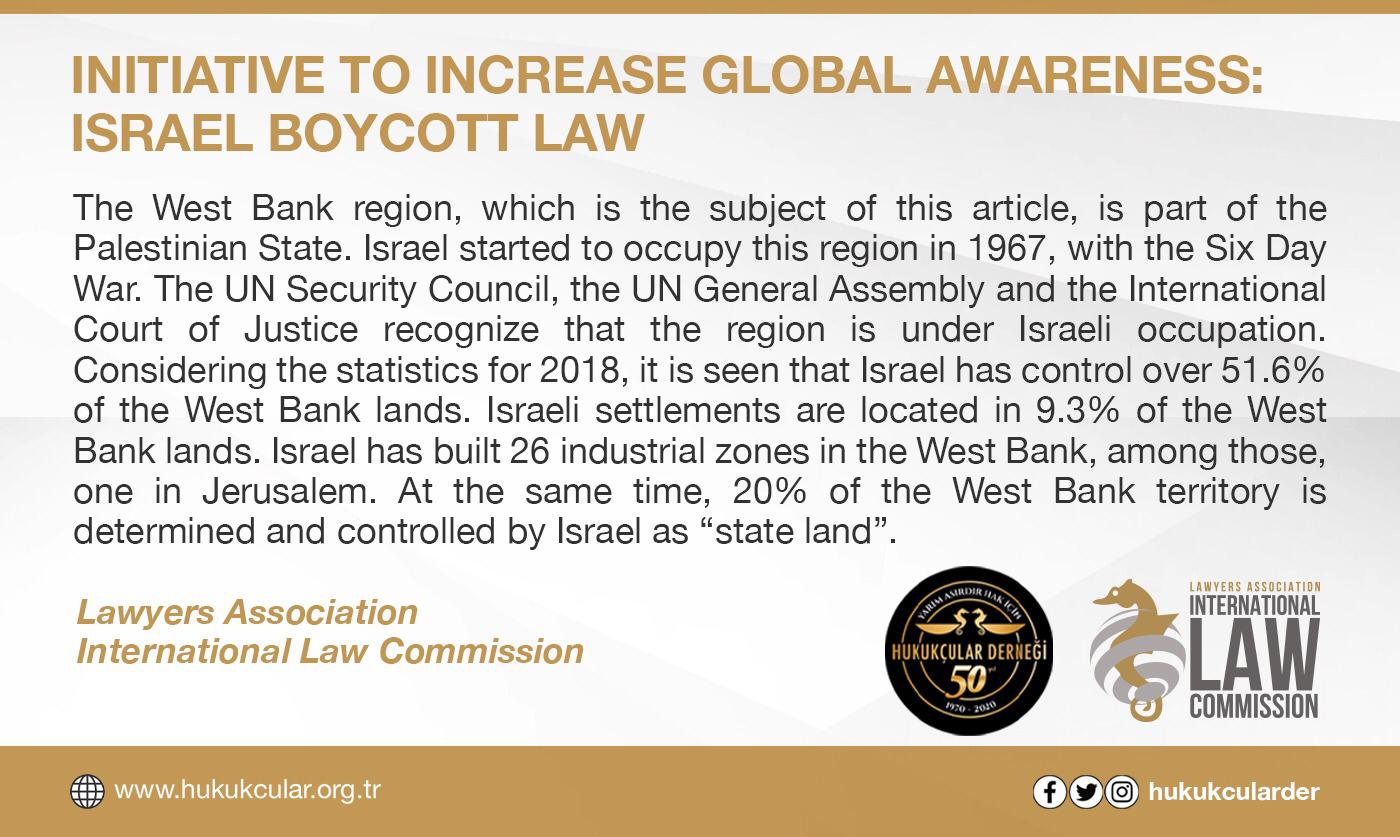 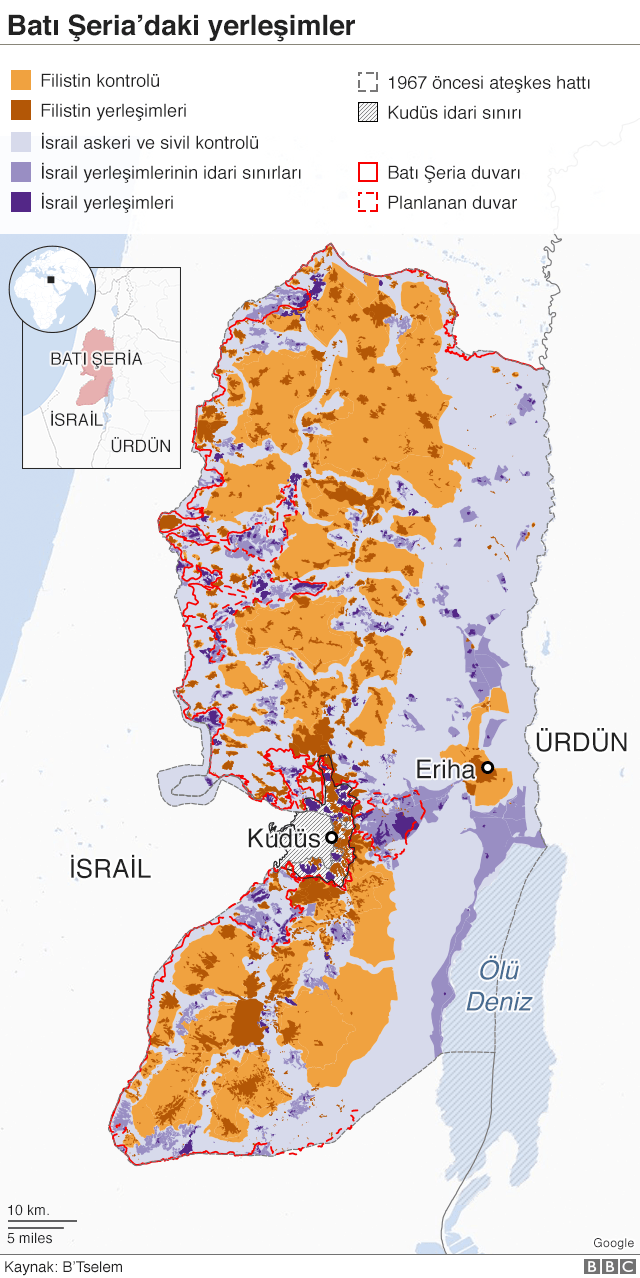 In this article, we will evaluate the draft law proposed in Ireland. The subject of the draft law covers the exports made through the lands occupied by Israel.

The EU is Israel’s largest import and export market; approximately one third of Israel’s total trade volume is with EU countries. Israel became the 27th largest trade partner of the EU in 2014.

The draft law we will consider in this context, stipulates it as a crime to import or sell the goods produced, to provide certain services and to supply the resources extracted from the occupied regions (west Bank) by Israel. The draft law was presented to the agenda of the Irish parliament by independent senator Frances Black in January 2018 and found support by many human rights organizations; Approved by Seanad Éireann and Dáil. However, the law has not yet been enacted by the government and has undergone some form of economic stress testing.

The purpose of the draft law was described as an attempt to raise global awareness of injustices to the Palestinian people. It has been argued that the trade with illegal settlements in the occupied areas is to justify the presence of the invader directly and to ignore international law.

With this draft law, it is intended to ban the import of goods produced or the services provided through the Israel’s occupied territories, Golan Heights and Israelis who travel temporarily beyond the Green Lines. Accordingly, the concept of “occupied lands” will be determined as the regions where international consensus exists and the draft law will be valid for these regions. In other words, the target area is the territory outside Israel’s internationally accepted borders.

In accordance with international criminal law, moving a civilian population of a state to a military-occupied territory is a war crime. The driving or transport of all or part of the population in the land within or outside this country, is considered as a war crime. This situation is accepted as a “serious violation” of law and practices that are not of international character but applicable in armed conflicts. In this context, Ireland aimed to prevent conflict of attitude between this law and its political policy and trade policy.

In the Irish case, the boycott law will apply to Irish citizens, people residing in Ireland, a company established under company law or based in Ireland and all legal and natural persons. According to the law, importing, attempting to import or helping to import y from settlements in occupied areas; selling, attempting to sell or helping to sell goods belonging to this region; attempting to conclude an agreement with the occupation settlements or conclude an agreement; the use and removal of resources in the region constitute a crime. The sanction of this crime has been defined as 12 months imprisonment or 250.000 € fines or both.

The question of how the Irish economy will be affected if this law proposal is accepted has been a matter of curiosity and subjected to various evaluations. Considering the EU-Israel Cooperation Agreements, this law proposal can be seen as a law proposal that violates EU Law. However, given that the scope of the law proposal is limited only to the occupied areas and the issue is based on public morality, public policy or public safety and protection of human health and life, the violation situation disappears. Especially in terms of “public policy”, Ireland considers this type of law to be compliant with all other laws and does not hesitate both as the government and the people of the country to enact such an arrangement. However, with the approach of the law to the approval stage, the USA has accepted the Ban to Boycott Israel. Thus, Ireland, due to different international balances, reviews this situation.

The International Court of Justice adopted the principle of respect for territorial integrity as the integrated case-law and described the ban on the use of force as the norm of jus cogens. One of the building blocks of International Law is the principle of respect for territorial integrity. According to the first paragraph of the common article of the United Nations International Covenant on Civil and Political Rights and the United Nations International Convention on Economic, Social and Cultural Rights (Twin Laws); “All peoples have the right to self-determination. Under this right, all peoples freely determine their own political status and freely carry out their economic, social and cultural development ”. In this context, Irelands move reveals its freedom in the political policy of the state.

Again, the UN Convention Article 1: “Taking effective joint measures to prevent and frustrate the threats of peace, to suppress the acts of attack or other disruption of peace, and to correct or resolve international disputes or situations that may lead to disruption of peace in accordance with the principles of justice and international law”principle has been regarded as the purpose of the UN, and the boycott draft law is in line with EU Law, UN Charter, and ICJ Decisions. Because the law only targets occupation areas. The target is not directly Israel’s legitimate rights recognized by the UN. This reactive attitude will be an important step towards the rejection of annexation of land and the maintenance of international peace.

In this context, Can Turkey issue a boycott law? If such a law is enacted, what are the consequences? We can evaluate it through the example of Ireland.

Turkey, on March 28th 1949 was the first Muslim country to recognize Israel officially. It shows a reaction at the level of condemnation about the occupied lands. Although the boycotts of various NGOs continue about Israel from time to time, a country-wide boycott decision has not been brought up to date.

When a similar draft law is on the agenda for the boycott arrangement, the scope of this regulation will have to be determined first. Of course, the first point to be determined has to be the area which is seen as an “occupied land”. Additionally, which companies will be covered by the ban, which products should be considered, and many other issues will need to be determined in detail. Indeed, Turkey has effective trade relations with Israel. In accordance with the principle of Self-Determination, Turkey is free to determine its foreign policy. But before, Turkey has to consider its obligations created by international agreements, which might limit its area of action.

.After the Irish boycott law came to the agenda in Ireland, action was taken not only on the Israel, but also by the U.S. similar actions can be expected to be taken if the issue is brought to agenda in Turkey. For this reason, it is very important to reveal a legal regulation to be worked on both in terms of international law and in accordance with the principle of equity.

Sari on the applicability of certain US Laws to the Bill