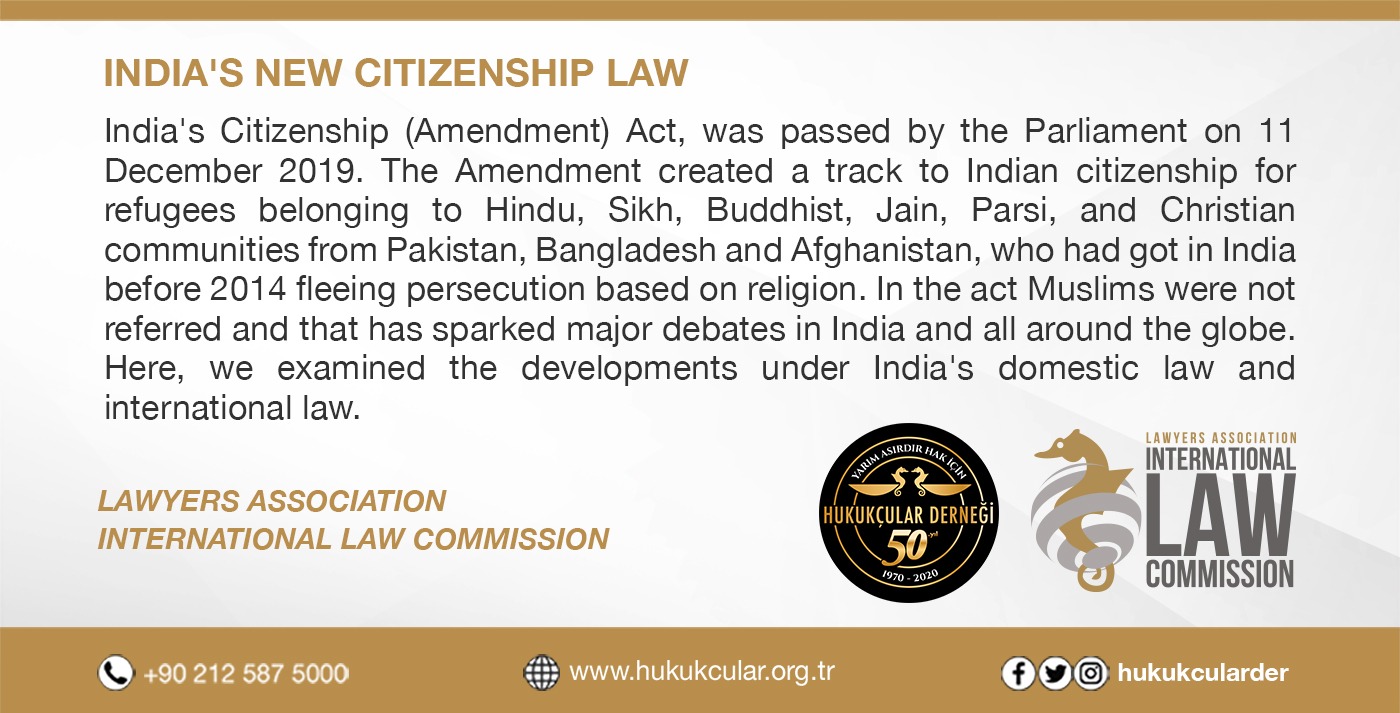 The Citizenship (Amendment) Act, was passed by the Parliament of India on 11 December 2019. It amended the Citizenship Law of 1955 and was presented in 2016 by the BJP (Bharatiya Janata Party) Government. The Amendment created a track to Indian citizenship for refugees belonging to Hindu, Sikh, Buddhist, Jain, Parsi, and Christian communities from Pakistan, Bangladesh and Afghanistan, who had got in India before 2014 fleeing persecution based on religion. In the Act, Muslims were not referred. In other words, under the new law Muslims from those states were not given such eligibility. The amendment limits itself only to the Muslim-majority neighbors of India, but however, doesn’t give any attention to the persecuted Muslims of those lands.

Due to the National Register of Citizens (NRC), the Muslims could be made stateless, while the Citizenship Amendment Act would be able to protect people with Hindu, Sikh, Buddhist, Jain, Parsi or Christian identity by offering them Indian citizenship even if they failed to prove that they were citizens of India under the harsh requirements of the NRC. NRC was mandated by the 2003 amendment of the citizenship law. It requires the Government of India to create and maintain a National Register of Citizens. The NRC documents all the legal citizens so that the people who are left out can be recognized as illegal immigrants. People need to provide a prescribed set of documents issued before a specified expiration date to be included in it. Until 2020, it has only been carried out in the state of Assam, but the BJP has promised its implementation for the whole of India in its 2019 election campaign. The experience with Assam NRC reveals that many people were declared “foreigners” because their documents were viewed as insufficient.

No doubt that the new citizenship law is fundamentally discriminatory on the ground of religion. Religion is being openly used as a standard for citizenship. India’s goal of protecting persecuted groups is gratifying, but nevertheless, this should be accomplished through a nondiscriminatory manner. Muslims who had been oppressed in those three countries due to their religion need to be treated with compassion, not with hatred and discrimination.

The utilization of religion as a standard for citizenship is in contradiction with the basic structure of the Constitution of India as well. Indeed, the new citizenship law violates Constitution’s Article 14, one that safeguards equality of all the people in India.

Article 14 – Equality before law.—The State shall not deny to any person equality before the law or the equal protection of the laws within the territory of India.

It’s important to remember that the Indian Constitution(that was implemented in 1950), in the beginning, guaranteed citizenship to all of the country’s residents, and made no distinction on the ground of religion.

The new citizenship law is also against International Covenant on Civil and Political Rights which India ratified on 10 April 1979 and Universal Declaration of Human Rights (UDHR) which India voted in favour with 47 other nations at that time. Here are the relevant articles:

Each State Party to the present Covenant undertakes to respect and to ensure to all individuals within its territory and subject to its jurisdiction the rights recognized in the present Covenant, without distinction of any kind, such as race, colour, sex, language, religion, political or other opinion, national or social origin, property, birth or other status (ICCPR Article 2/1)

It can be seen that the religion is mentioned in the definition to prevent states from acting as they please.

It’s a great deal of importance to remind everyone that unnlike asylum, refugee status is a legal right. Once the criteria have been satisfied, States have an obligation to treat the person as a refugee; there is no discretion whatsoever.

States should not treat refugees, no less favorably than other foreigners who are there, and refrain from any discriminatory action between refugees on grounds of race, religion or country of origin.

So far the new citizenship law only created tensions. Already, too many people have been killed in the ongoing protests as an aftermath of police firing guns throughout the whole India. Internet shut down, detainment of thousands of protesters and the police brutality to the protestors in particular, worry many deeply.

Among all of those developments, it is a positive thing to learn that the law has been taken to the Supreme Court by various bodies in India. The new citizenship law is explicitly discriminatory towards Muslims and it creates an environment for officials to brand Muslims as second-class citizens of India and thus must be found to be unconstitutional by the Supreme Court. Otherwise, this unfair treatment of Indian government will isolate India from the rest of the world and further polarize the country.