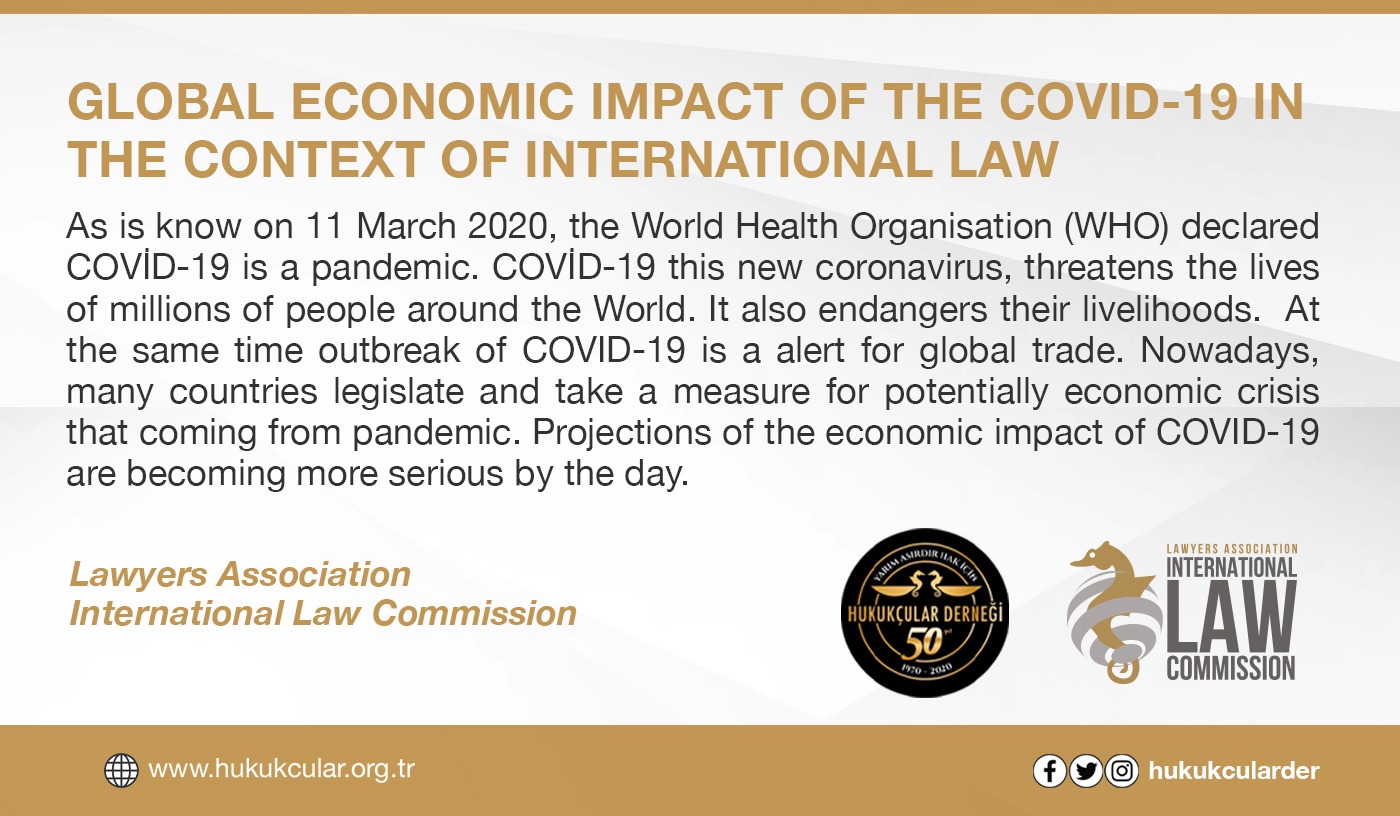 I- COVID-19 and Global Trade

As is know on 11 March 2020, the World Health Organisation (WHO) declared COVİD-19 is a pandemic. COVİD-19 this new coronavirus, threatens the lives of millions of people around the World. It also endangers their livelihoods. At the same time outbreak of COVID-19 is a alert for global trade. Nowadays, many countries legislate and take a measure for potentially economic crisis that coming from pandemic. Projections of the economic impact of COVID-19 are becoming more serious by the day.

United Nations Conference on Trade and Development (UNCTAD) in its latest report[1] on COVİD-19 impact on developing countries has predicted that the major economies to be least exposed to recession would be China and India. “It is now evident that pandemic mitigation efforts and lockdowns around the world will have devastating effects on all economies, independent of their links to global supply networks.” The speed at which the economic shockwaves from the pandemic has hit developing countries is dramatic, even in comparison to the 2008 global financial crisis. The report shows that in the two months since the virus began spreading beyond China, developing countries have taken an enormous hit in terms of capital outflows, growing bond spreads, currency depreciations and lost export earnings, including from falling commodity prices and declining tourist revenues. The consensus is that most if not all major economies will experience a deep recession.

This pandemic will inevitably have an huge impact on the global economy on trade and consequently on jobs and peoples’s well-being. Recent projections predict an economic downturn and job losses that are worse than of the global financial crisis a dozen years ago. Obviously, In the crisis of pandemic no country is self sufficient. Global trade has an important role here. Trade is what allows fort the efficient production and supply of a basic goods and services. Medical supplies and equipment and food. Keeping international trade open and investments flowing will be critical to keep shelves plentiful and prices affordable. Today, the worries are disease and recession. Yet, in time, people will return to work. Many jobs will then depend on recovery of external demand. This is why policy coordination and cooperation are so important.

As governments continue to act to respond to the virus, companies may begin contemplating significant and potentially far-reaching decisions to adjust to the new reality of COVID-19:

The global shipping industry is losing approximately $350 million per week due to COVID-19, and the effects of canceled sailings and upended logistics are causing major issues in global shipping industry. The airline industry may lose an estimated $60 billion to $110 billion, while the business travel industry is losing an estimated $46 billion per month as companies cut business travel.

The French Finance Minister, Bruno Le Maire, pressed for a review to determine which French industries need to reduce their dependence on suppliers from China and Asia and rebuild “economic and strategic independence.” The pharmaceutical industry was highlighted in particular, with Le Maire claiming that 80 percent of the raw materials for active pharmaceutical ingredients in some drugs are sourced from China or Asia.

The likelihood of a stronger dollar as investors seek safe-havens for their money, and the almost certain rise in commodity prices as the global economy slows down, means that commodity exporters are particularly vulnerable.

COVID-19 continues to damnify with the global economy, disrupting all manner of business throughout the world. In these circumstances, States and foreign investors will be considering their positions under applicable investment treaties. If a COVID-19 measure is challenged by a foreign investor, there will be a fundemental problem as to whether the measure is potentially in breach of the substantive provisions of an investment treaty. States can defend against treaty claims by; treaty exceptions or defences under customary international law.

Exceptions usually provide that the treaty will not prevent a party from adopting or enforcing measures to protect human life or health, provided that the measures are not arbitrary or discriminatory. States are likely to seek to rely on these general exceptions provisions in relation to measures taken in response to COVID-19.

Customary international law defences are not set out in the treaty, but have been codified in the

Responsibility of States for Internationally Wrongful Acts. There ise one circumstances,

triggering a situation of force majeure. But this will depend on the specific obligation at issue,

and the particular circumstances at concrete cases. The defence of force majeure is codified in

1.The wrongfulness of an act of a State not in conformity with an international obligation of

that State is precluded if the act is due to force majeure, that is the occurrence of an irresistible

force or of an unforeseen event, beyond the control of the State, making it materially impossible

in the circumstances to perform the obligation.

Acoocrding to the Article 23, a successful claim of force majeure must fulfil five conditions:

The only binding legal regulation which addresses the prevention, protection and control of the international spread of disease is the International Health Regulations, 2005. According to Article 6,

instrument in Annex 2. Each State Party shall notify WHO, by the most efficient means of

communication available, by way of the National IHR Focal Point, and within 24 hours of

instrument, as well as any health measure implemented in response to those events.”

Following this notification, the State has to continuously communicate to the WHO timely, accurate and sufficiently detailed public health information available to it on the event. Also, according to Article 7,

“If a State Party has evidence of an unexpected or unusual public health event within its territory, irrespective of origin or source, which may constitute a public health emergency of international concern, it shall provide to WHO all relevant public health information. In such a case, the provisions of Article 6 shall apply in full.”

According to research, various scholars have argued that if China had taken proactive measures to contain and suppress COVID-19 earlier in December 2019, the number of cases could have been mitigated by up to 95%. These facts show that China has violated Article 6 and 7 of the International Health Regulations, 2005.

Income losses are expected to exceed $220 billion in developing countries. With an estimated 55 per cent of the global population having no access to social protection, these losses will reverberate across societies, impacting education, human rights and, in the most severe cases, basic food security and nutrition.

UN calls for $2.5 trillion coronavirus crisis package for developing countries. In the face of a looming financial tsunami this year, UNCTAD proposes a four-pronged strategy that could begin to translate expressions of international solidarity into concrete action:

As events continue to unfold, a serious evaluation of changing suppliers, altering logistics routes, and updating sourcing will become more likely as companies navigate these events in search of a safe harbor. This pandemic is a global challenge also the World need a global response to fighting against pandemic. Coordinating efforts would increase collective fighting power. Transparency and information sharing is also a important part of crisis response The Governments should important steps take to limit the immediate economic damage. Once the medical crisis begins to recede, trade will allow countries to help each other, bringing faster and strong economic recovery for us all Human Solidarity and international cooperation.

[2] Helicopter money is a proposed unconventional monetary policy, sometimes suggested as an alternative to quantitative easing (QE) when the economy is in a liquidity trap (when interest rates near zero and the economy remains in recession).