FRANCE AND NAGORNO-KARABAKH: THE SENATE REQUESTS THE RECOGNITION OF THE NAGORNO KARABAKH IN DISREGARD OF INTERNATIONAL LAW 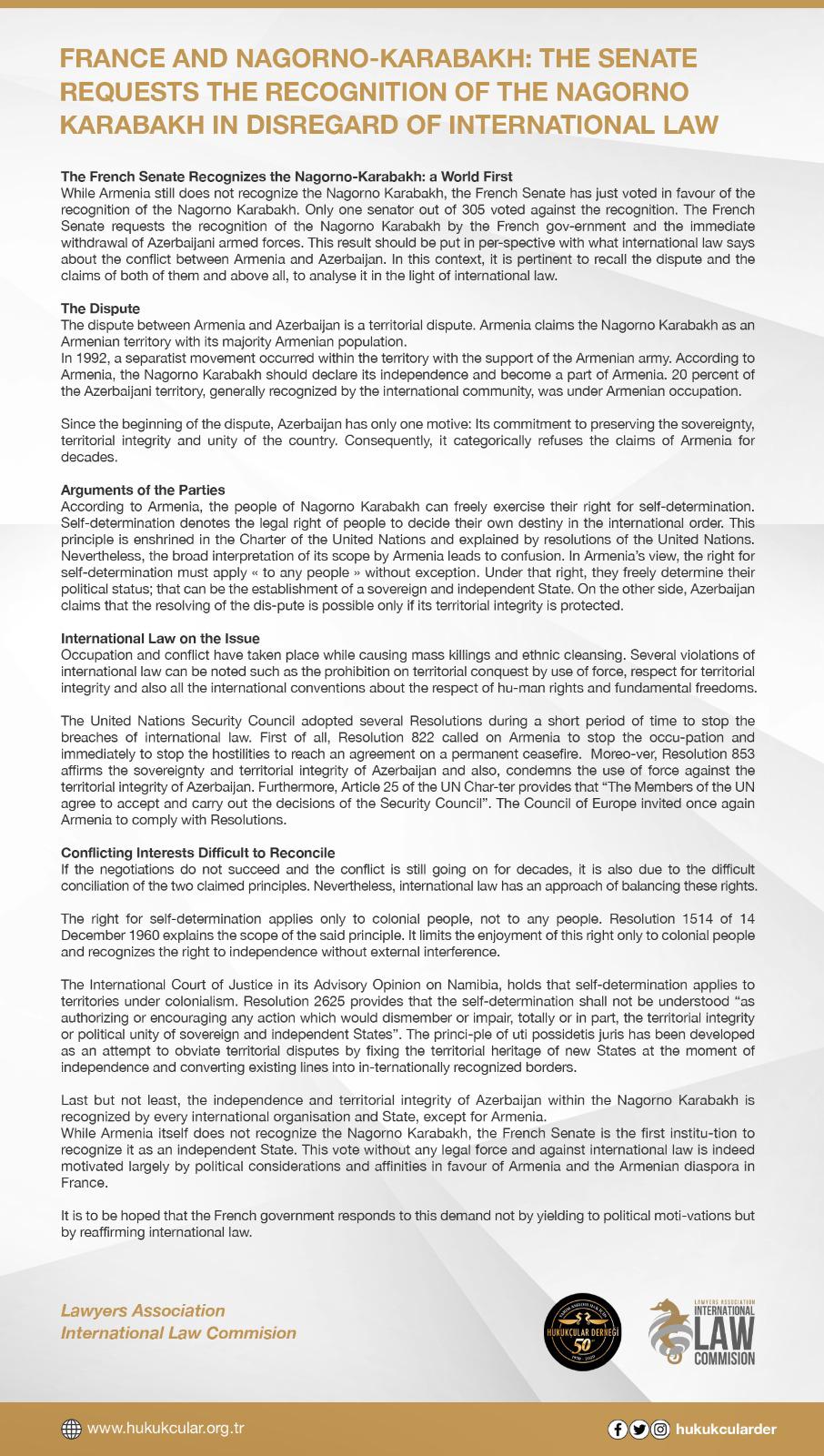 FRANCE AND NAGORNO-KARABAKH: THE SENATE REQUESTS THE RECOGNITION OF THE NAGORNO KARABAKH IN DISREGARD OF INTERNATIONAL LAW

The French Senate Recognızes the Nagorno-Karabakh: a World Fırst

The dispute between Armenia and Azerbaijan is a territorial dispute. Armenia claims the Nagorno Karabakh as an Armenian territory with its majority Armenian population.

In 1992, a separatist movement occurred within the territory with the support of the Armenian army. According to Armenia, the Nagorno Karabakh should declare its independence and become a part of Armenia. 20 percent of the Azerbaijani territory, generally recognized by the international community, was under Armenian occupation.

Since the beginning of the dispute, Azerbaijan has only one motive: Its commitment to preserving the sovereignty, territorial integrity and unity of the country. Consequently, it categorically refuses the claims of Armenia for decades.

According to Armenia, the people of Nagorno Karabakh can freely exercise their right for self-determination. Self-determination denotes the legal right of people to decide their own destiny in the international order. This principle is enshrined in the Charter of the United Nations and explained by resolutions of the United Nations. Nevertheless, the broad interpretation of its scope by Armenia leads to confusion. In Armenia’s view, the right for self-determination must apply « to any people » without exception. Under that right, they freely determine their political status; that can be the establishment of a sovereign and independent State. On the other side, Azerbaijan claims that the resolving of the dispute is possible only if its territorial integrity is protected.

Internatıonal Law on the Issue

Occupation and conflict have taken place while causing mass killings and ethnic cleansing. Several violations of international law can be noted such as the prohibition on territorial conquest by use of force, respect for territorial integrity and also all the international conventions about the respect of human rights and fundamental freedoms.

The United Nations Security Council adopted several Resolutions during a short period of time to stop the breaches of international law. First of all, Resolution 822 called on Armenia to stop the occupation and immediately to stop the hostilities to reach an agreement on a permanent ceasefire. Moreover, Resolution 853 affirms the sovereignty and territorial integrity of Azerbaijan and also, condemns the use of force against the territorial integrity of Azerbaijan. Furthermore, Article 25 of the UN Charter provides that “The Members of the UN agree to accept and carry out the decisions of the Security Council”. The Council of Europe invited once again Armenia to comply with Resolutions.

If the negotiations do not succeed and the conflict is still going on for decades, it is also due to the difficult conciliation of the two claimed principles. Nevertheless, international law has an approach of balancing these rights.

The International Court of Justice in its Advisory Opinion on Namibia, holds that self-determination applies to territories under colonialism. Resolution 2625 provides that the self-determination shall not be understood “as authorizing or encouraging any action which would dismember or impair, totally or in part, the territorial integrity or political unity of sovereign and independent States”. The principle of uti possidetis juris has been developed as an attempt to obviate territorial disputes by fixing the territorial heritage of new States at the moment of independence and converting existing lines into internationally recognized borders.

Last but not least, the independence and territorial integrity of Azerbaijan within the Nagorno Karabakh is recognized by every international organisation and State, except for Armenia.
While Armenia itself does not recognize the Nagorno Karabakh, the French Senate is the first institution to recognize it as an independent State. This vote without any legal force and against international law is indeed motivated largely by political considerations and affinities in favour of Armenia and the Armenian diaspora in France.

It is to be hoped that the French government responds to this demand not by yielding to political motivations but by reaffirming international law.