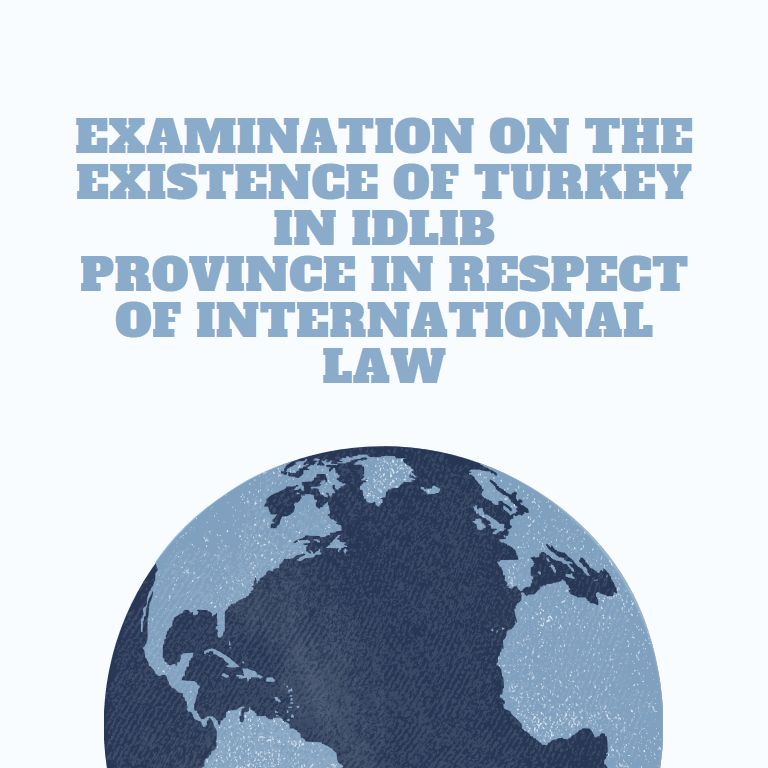 The attack of Russia and Iran-backed Damascus forces that hit the Turkish battalion in Idlib brought into question of legality of existence of Turkey and Russia in northern Syria, Turkey’s cross-border operations and their compliance with international law. In this article, the political situation in the northern Syria and the legality of the presence of Turkey in Idlib with respect to international law will be briefly discussed.

A. Idlib: The Indispensable Agenda of Iran, Russia And Turkey Agreement

Idlib is a very important city in terms of being in a position to determine the fate of the Syrian civil war and the balance of power in the region. The number of militants in Idlib, whose population is close to 3 million, is estimated to exceed thirty thousand. In Idlib province, where a final ceasefire ambiance must have been provided with the Sochi agreement, however this is not the situation, the opponents and radical groups that aim to overthrow the Assad regime have been deployed. With respect to other states base their existence in the region on varied reasons as follows;

Russia and the Assad regime aim to keep the region under control with military operations in so-called conformity with Astana agreement; Iran, to maintain the Shiite influence in the region and use Syria as a buffer zone; USA, to prevent the expansion of Russian influence by providing control in the region through the Kurds; at most, Turkey, to enable the control through the opponents of Assad regime and become a neighbour of a Sunnite government in power which will not allow Kurdish groups to strengthen. Syrian army’s operations engender a humanitarian and security problem for Turkey. Majority of immigrants run away from Syria reached to the frontier of Turkey and the whole existence of such terrorist groups endangers the territorial integrity of Turkey. Furthermore, it becomes impossible for Turkey to remain as a neutral actor in the Syrian civil war.

B. The Syrian Crisis in The International Arena: The Process Leading to The Sochi Agreement

Following the increase of the actors inside and outside the region and the humanitarian crisis, Geneva conferences were initiated under the cover of the United Nations (UN) to end the civil war in Syria. US, Russia, China, European Union, Turkey, Iraq, Kuwait, Qatar attended to the first meeting of Geneva in 2012. However, the Geneva negotiations did not achieve a final conclusion, since it was mostly a process managed by Western countries. Therewith, in the alternative, Turkey, Iran and Russia initiated negotiation process in Astana in 2016. In general terms, in Astana, States determined to establish a monitoring mechanism for the ceasefire which was adopted on December 30, 2016. De-escalation zones were agreed and Idlib was also included in the sixth round of negotiations. At the end of the sixth round, a paper entitled ” Joint Statement by Iran, Russia and Turkey on the International Meeting on Syria in the Astana” was published.

Three countries, which subsequently identified themselves as “guarantors” in the Syrian crisis, also leaded to the creation of a constitutional committee to find a solution to the Syrian crisis within the framework of the UN Security Council Resolution No.2254. Finally, association of Russia and Turkey ended up with the Sochi Memorandum of Understanding which is signed within the scope of the 2019 Operation Peace Spring. In accordance with the Memorandum, Turkey founded observation plots and Syrian troops backed by Russia were provided to act easily. However, the signatory states’ violation of the agreement and the latest developments in Idlib confirmed that diametrically opposing personal interests in the region have turned into a conflict area. Therefore, Geneva, Astana and Sochi agreements have become ineffective.

After the current attack, NATO allies took the decision of the extraordinary meeting following the call of Turkey in accordance with Article 4 of NATO Agreement. This article regulates total solidarity when there is a threat to the territorial integrity and political independence of an ally. Article 5 of the Treaty states that an attack in North America or Europe will be deemed to have been made against all member states and that all necessary measures shall be taken, including the use of armed force, by using the right to collective defense in accordance with Article 51 of the UN Charter. However, neither NATO ally has so far negotiated for the application of Article 5. Turkey’s call for NATO pursuant to Article 4 brought up the question of altering Turkey’s foreign policy orientation towards the West.

D. Compliance of Cross-Border Operations of Turkey in Idlib With International Law

As mentioned above, it is obvious that there is no final peace in Syrian civil war. Thereupon, Turkey has carried out a series of cross-border operations in Syria in order to prevent threats to its national security. In this article, Turkey’s existence in Idlib province and the legality of cross-border operations carried out by Turkey in order to deploy troops in Idlib’s more interior regions following the Operation Euphrates Shield in Syria are discussed. Within the frame of the protection of Syria’s sovereignty, independence, unity and territorial integrity and of the UN Security Council Resolution No. 2254, deployment of troops of Turkey which is in charge of the observance of ceasefire, as a guarantor country in the aim of ensuring the continuity of the ceasefire in the de-escalation zones does not constitute a violation of Astana Agreement neither its object and purpose. Furthermore, the failure to end the civil war in Syria and the ineffectiveness of the political steps compelled Turkey to deploy its troops in Idlib insomuch as the situation in Syria presents a threat to its territorial integrity.

An operation initiated against a threat to territorial integrity forms legitimate self-defense if there is an imminent attack. In any case, whether the legitimate self-defense criteria are not fulfilled, to prevent humanitarian crisis and to provide the peace and stability in the region, Turkey’s cross-border operations will be considered in accordance with international law by analogy to the peacekeeping operations which are regarded as legal and legitimate by the international community.

Consequently, even if aforementioned political steps have been taken in the Syrian civil war, since 2011, a final solution has not been achieved. Furthermore, within the scope of Astana Agreement and the UN Security Council Resolution No. 2254, cross-border operations carried out by Turkey in order to protect its territorial integrity and its political independence are legal and legitimate and in accordance with international law.